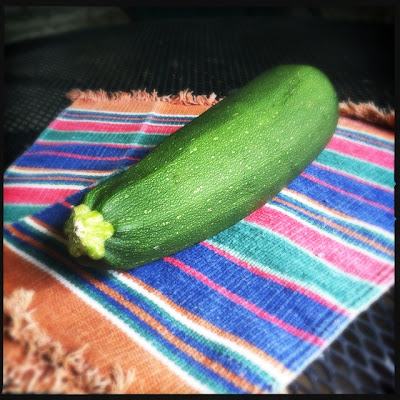 “You know, you’re supposed to EAT that,” GL deadpanned as she eyed the Extra Large Zucchini Nevin was handing to me.  GL’s mind tends to lean toward the gutter.

My mind to tends to lean toward the next thing I’m going to eat.  I was fantasizing  about Zucchini Bread, of course.  A gigantic amount of zucchini bread.

I’ve never understood people who complain about the amount of zucchini growing in their gardens.  They make a big deal out of how much zucchini they had to give away, how sick they are of eating zucchini.  There seems to be a simple remedy to this:

And it’s the same folks – every year – who pawn their mighty amounts of the green squash on whomever comes to visit.  Then they make it sound as horrible as possible as they hand this gift over, practically throwing it at you like you were playing a game of “Hot Potato”.  “Oh, you take it!  I don’t want it!  Get it out of my house!  I don’t want to see another zucchini for the rest of my life!!!”

I hope none of my zucchini-growing friends read this (Hi Nevin), but I developed this very simple system …  My friends plant, water & weed.  They grow lots of zucchini.  They give zucchini to me.  The End. 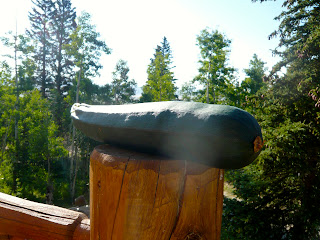 So I took my Giant Zucchini on a road trip.

AJASCIT (Assistant Junior Apprentice Sous Chef In Training – AKA my husband) and I were visiting friends in Southern California.  We had driven from Denver to SoCal, spending a week near Newport Beach.  We were about to leave to make the two-day trip back home when our friends presented us with a parting gift.  “Here’s something to remember us by,” they snickered.  They handed me a 27 foot long zucchini.  From the looks of it, our friends had been injecting steroids into this puppy for quite a while, possibly in a misguided and illegal effort to win a blue ribbon at the Orange County Fair.

“Thanks,” I said.  What was I supposed to say?  I can’t take your Giant Zucchini because I might be put in jail if they find this in my possession?  I took the zucchini, held it in my arms like a baby, and solemnly walked to the car.

“What the Hell are we going to do with THAT?” AJASCIT said once we got out of earshot of our generous friends, barely hiding his disgust.  We had two days of travel through the hottest part of the country at the hottest part of the year.  A Giant Zucchini wasn’t in our game plan.  A GZ baking in the back of the car in 115-degree heat wasn’t going to work.   But we had a cooler.  We could keep it in the cooler!  I had held it like a baby.  I had bonded.  That Giant Zucchini was going to make it to Denver if I had something to do with it.

We weren’t even out of town before I felt the need to share the magnificence of this Giant Zucchini.  We had to gas up, so as AJASCIT was putting the petrol in, I grabbed the GZ and ran up to the first person I saw. 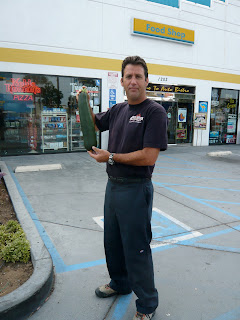 “Here!  Take this!” I said as I handed the stranger the GZ.  I grabbed my camera and took a shot.  Strangely enough, he didn’t seem surprised to be handed a Giant Zucchini and seemed even less surprised to be asked to be photographed with it.  Obviously, the GZ had magical powers.  Charisma.  I quickly said my thanks, grabbed the GZ and scurried away…

We hit the open road. 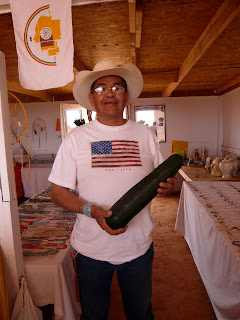 At a roadside market in Zion National Park.  He was so sweet that I bought a turquoise necklace from him after this picture was taken.  Well, OK, I would have purchased the jewelry anyway. 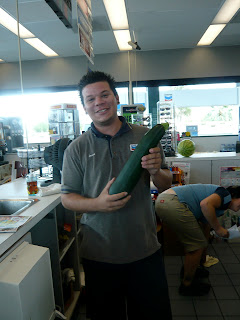 This was the second person I asked at a convenience store when we stopped for snacks.
The first guy asked me for $20 for the privilege . 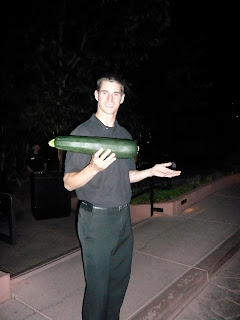 The valet at the hotel.  He looks confused.
Maybe he thought it was his tip. 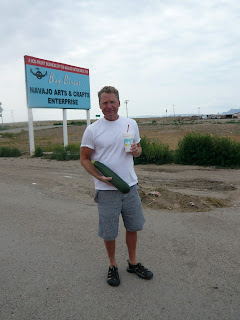 AJASCIT wasn’t very patient with my GZ obsession.
Or it could have been the fact that I felt the need to shop at every stop. 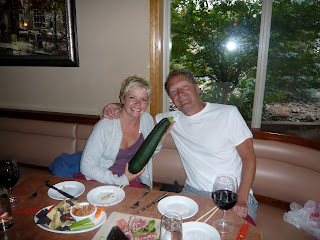 AJASCIT, the Giant Zucchini and me at dinner.
I have no comment on this picture. I will leave that to my
smutty-minded friend, GL. 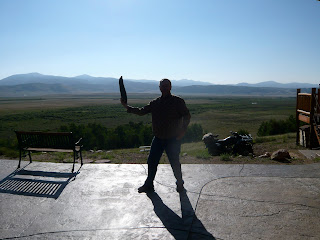 My mountain neighbor, Steve, showing the GZ the respect and adulation it deserved. 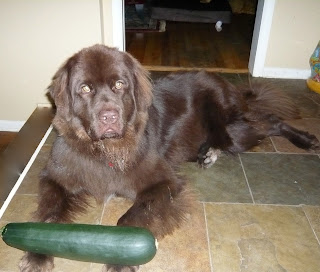 Hud, looking as confused as the Valet Guy.  We were away for more than 10 days.
“Mom & Dad Went To Newport Beach And All I Got Was A Lousy Zucchini.”

Alas, the road trip was over and I still had a giant zucchini on my hands.  Yes, I had held it like a baby.  Of course, the GZ had made many friends – both real and bribed – all over the Southwest.  But I needed to eat it.  Even dirty-minded-Ginny would know that was my only choice.

How many loaves of zucchini bread will a Giant Zucchini make? 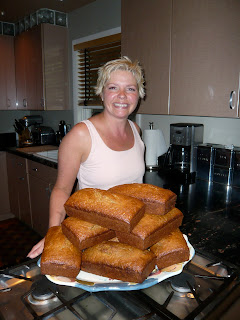 Eight.  But it’s HEALTHY zucchini bread.  Unless you eat all eight loaves, of course.

Nevin's Extra Large Zucchini met the same fate.  But it made only six loaves.  Six yummy loaves of Low-Fat, Low-Sugar Lemon Zucchini Bread.  Which, I assure you, is easier to give away than whole zucchinis.

Unless you're giving them to me.  I will take your zucchinis all day long. 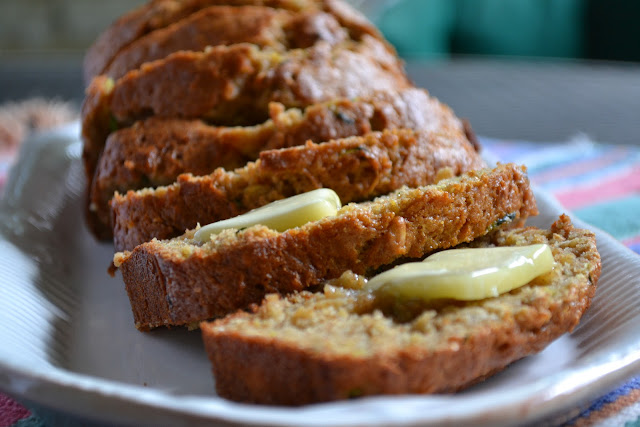 Posted by Kelly Bartus Kal at 9:08 AM