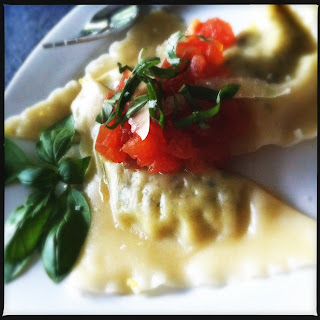 Every few months, The Michigan Hill Chefs Association (MHCA) hosts a Chefs’ Dinner, a themed sit-down multi-course meal for 12 – 16 friends.  There are four members in the Association: Cbk is the Dessert Sorceress.  CD is the King of Seafood. CS (married to CD) is the Magician.  And then there’s me.  We even have chef’s  jackets embroidered with our names and the MHCA logo to wear during our events. 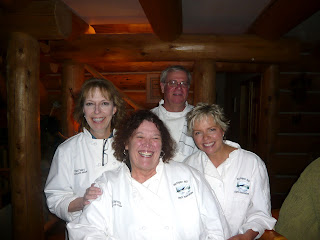 My husband was feeling left out, I believe.  And I think he was more than a little jealous of the jackets.  But just because he throws a half bottle of Chianti into jarred marinara for his famous turkey spaghetti, that doesn’t mean he’s worthy of a jacket.

The Chefs and I took pity on him and gave him an assignment for the next dinner.  His task?  Minestrone Soup.  The theme was Northern Italian, so we thought we’d give him something that he couldn’t mess up, basically vegetable soup.  But in order for him to fulfill the task, he needed a little coaching.

A few weeks before the event, we made the soup.  I patiently explained to him the difference between dice, slice, chop and mince.  I showed him how to hold his knife correctly, with his index finger curled over the blade and the rest of his hand firmly gripping the handle.  I told him why the vegetables needed to be cut the same size, saying that it wasn’t just about how the soup looked, but it was also important because the vegetables needed to cook evenly.  He was a very good student and the soup came out perfectly.  It was beautiful.

The next week, we did it again.  This time, he insisted on flying solo.  I was sitting at the kitchen table reading a magazine when I heard it.

“What are you doing?” I said, acting all nonchalantly as I walked over to him.  As I got closer, I was horrified to see that he’s wasn’t holding his knife correctly. His other hand, fingers extended, was dangerously close to the chopping action.

And the vegetables he’s chopping?  A sloppy mess.

Before I know it, I’m yelling at him,  “That’s not how I told you to hold the KNIFE!  You’re chopping too fast!  That’s not a dice!  That’s a mince!  You’re not doing this right!!!  JEESH – YOU’RE GOING TO CUT YOUR FINGER OFF!!!”  I became Gordon Ramsey, minus the profanity  (well, OK, maybe there was a little profanity).

Right in front of my eyes, my wonderful, successful and gorgeous husband became a three year old.

You can guess how it all turned out.  The soup was visually unappealing.  Some of the veggies were mush.  The carrots, which were supposed to be diced, ended up sliced as big and thick as my thumb and weren’t cooked through at all.  It wasn’t good.

“I think it’s GREAT, “ he said.  “And everyone at the dinner next week is gonna think it’s great, too!”

This was a problem.  He’d been to previous dinners and he knew the level of quality the chefs provided.  For crying out loud, I was making Poached Egg Ravioli in Truffle Butter Sauce as a starter for this dinner.  What would everyone think once this brown messy soup with giant chunks of uncooked carrot appeared at the table?  I needed help.  I needed the Chefs.

I emailed everyone that night, telling them what happened.

“He’s certainly not ready for a jacket.  That’s for sure,” CD wrote back from his and CS’s home in Texas.  “He just an Assistant Junior Apprentice Sous Chef In Training, y’all.”

I replied, “AJASCIT!”  We MHCA members love our acronyms.

Cbk wrote back, “When I try to type in AJASCIT into my computer, it keeps auto correcting to ‘Tahiti.’  Sounds kinda good.”  Cbk is a transplanted Mississippi gal living in Florida.  (God, I love the Chefs’ accents.  I can even hear them when I read their emails.)

Clearly the chefs would be no help.  I would just have to suffer the embarrassment of AJASCIT feeding our guests not-so-good soup.

The evening of our Italian dinner, I kept praying that the Fritto Misto, the Poached Egg Ravioli, all of it would make our guests forget the Minestrone Soup.  But AJASCIT would have none of that.

When the soup was served, he went on and on and on, telling everyone every single small detail of the recipe.  He was throwing around phrases like “mise en place” and bragging about his excellent knife skills.  Everyone said that they loved it – of course.  The Chefs looked down at their bowls and then at me.  I knew what they were thinking:  The damn carrots weren’t cooked.

Next up…  My Poached Egg Ravioli.  I worked for weeks perfecting my homemade pasta and my technique.  This dish was the BOMB.  I served it and they ooohed and ahhhed  and exclaimed it to be one of the most delicious and unusual things they’d ever eaten.

“But my soup was really amazing, wasn’t it?” AJASCIT wouldn’t shut up about that stupid soup. 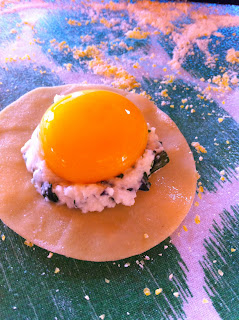 Jesus.  I just served a friggin’ POACHED EGG IN A RAVIOLI.

After dinner, my husband went up to the chefs to get their compliments, er, I mean opinions.  “It was good, really really good, wasn’t it?” he asked.  CD, an incredibly eloquent man, said in his Texas drawl,

“Just because it’s good, don’t make it right…  And your carrots weren’t cooked.”

Months later, AJASCIT/Tahiti still talks about that soup.  And I still tell him that his carrots were wrong.

Below is a recipe for much easier cheese ravioli using wonton skins in place of homemade pasta.  Yes, cheating doesn’t make it “right.”  But unless you’re a guest chef at a MHCA Chefs’ Dinner, it’s OK to stick with “good.” 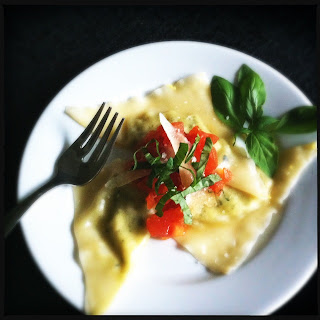