Give Beets a Chance 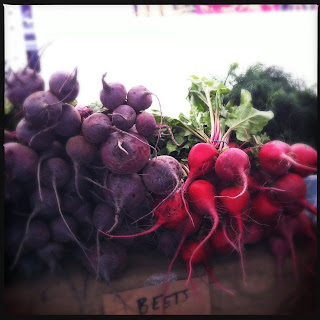 The foul food?  The puckery ends of a hot dog.  Sure, I ate the middle part, but something about the weird ends really bothered me that day.  Apparently, they also bothered our dog, George.  I surreptitiously threw the offensive bits on the floor hoping he would eat the evidence.  Even HE wouldn’t touch them.  George ate garbage and he wouldn’t eat the damn ends of those hot dogs.

At the end of dinner, my mother discovered them under my chair.  I don’t remember the exact chain of events, but those pieces of hotdog found their way back to my dinner plate.  I certainly hope she rinsed them, considering the garbage-eating dog and everything.

“You ate the middle but you won’t eat the ends?  They’re the same thing!  They taste the same!  If you don’t eat them, no dessert.  And no Lassie,” my horribly unfit and abusive mother said to me.

I thought I was in the clear here, in spite of my foolhardy attempt to poison the dog with those pieces of unsightly processed meat.  You see, we had a simple food rule in our house:  You Don’t Have To Finish It. You Just Have To Try It.  I figured that since I ate the MIDDLE of the hot dog, that was totally within the “Try” requirements of our family food rule.  But the fact that I had happily and readily eaten entire hot dogs, ends and all for probably as long as I could eat solid food was not lost on my mother.

My mother silently cleaned up around me.  The rest of the family – Dad, Jen & Kevin, went into the living room and turned on our black & white TV to watch "Lassie" (our second favorite family TV show after “Bonanza”.


The show was about to start and I was sitting at the kitchen table alone, staring down those two little bites and giving my mean mom the evil eye.  Even George, our dog, had abandoned me, probably pissed off that I had tried to kill him earlier.

When my horrible mother finished cleaning up, she took my plate and wordlessly put me in my room.  What?  No Lassie?  NO ICE CREAM?  As fate would have it, the room I shared with my sister was just off the living room where everyone was watching television.  I could hear every word of the episode I was missing and the sound of every family member's spoon-clink as they scraped up the last bit of vanilla ice cream and Hershey’s syrup from the bottom of their bowls.  It was torture.

After my Lassie-and-ice-cream deprived evening, the next time I faced down a hot dog, I acted the martyr and choked down the ends first.

Mom was right.  They did taste just like the middle.

Food aversions aren’t always about taste.  Sometimes, it’s just the way it looks.  I have issues with guacamole: something that color shouldn’t be that consistency. My 70-something-year-old uncle has never willingly eaten a mushroom because of the way it feels in his mouth.  My grandfather detested onions because of childhood trauma that had something to do with gathering an untold amount of onions from his parents’ garden as a child.  I have a friend who refuses to eat a sandwich because…  Well…  I’m not really sure why she won’t eat a sandwich, because that’s really weird.

I love beets.  They’re pretty.  They’re delicious.  They’re easy to make.  My husband’s dad was horrified by beets (his words, not mine).  They are a commonly and unnecessarily reviled food.

But trust me on this recipe.  It’s good.

And as my parents used to say, “You Don’t Have To Finish It.  You Just Have To Try It. “ 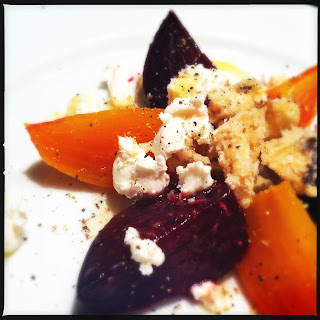 1  Large beet (bigger than a baseball) or 2 smaller beets, rinsed but unpeeled

Directions
·      Preheat oven to 350 degrees.
·      Wrap beet(s) in tin foil and bake for 1 ½ hours if using a large beet.  Test after 1 hour if using smaller beets.  Peel beets (see note).
Cut  into wedges and set aside.
·      Combine walnuts and sugar and water  in a sauté pan over medium heat.  Stir frequently until the sugar becomes dark.  Remove walnuts and cool on a piece of foil or parchment paper, being careful to make sure the walnuts aren’t touching.  The nuts will harden upon cooling, so you want to be sure they aren’t in a big clump.
·      Combine Dijon, honey, vinegar, olive oil and Kosher salt for vinaigrette.
·      Arrange beets on a plate, sprinkle walnuts over the top & drizzle vinaigrette and goat cheese.
Serve.

Tips and Shortcuts:
·      Beets are done when a sharp knife easily slides through.  Set aside to cool.
·      When beets are cool, take a bunch of paper towels and place the cooked beet inside the paper towels and rub vigorously.  This gets rid of the skin and avoids stained hands.  But it’s handy as a lip stain.
·      The whole dish, unassembled, can be made ahead.
o   Up to one day ahead, roast the beet(s) and cool.  Peel and wrap in plastic wrap or place in a plastic baggie and refrigerate.
o   The walnuts can be made up to one week ahead and stored in an airtight plastic container at room temperature.
o   Make the vinaigrette the day before to let the flavors meld. 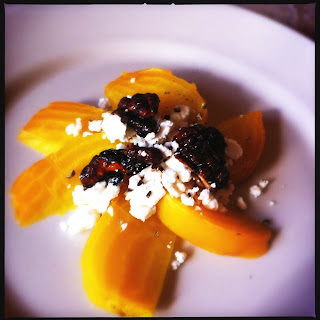