My Very Own Fabulous Birthday Party

Growing up, I never had my own birthday party.  I don’t mean that I never HAD a birthday party…  It’s just that I always had to share it.  With seven other people.

Apparently, there’s not a heck of a lot to do in April in Western New York, if you get what I’m sayin’.

I was having lunch with EmDee a few years back and I was whining to her yet again about how no one cared about my birthday, about how no one really loved me, blah blah blah.  You need to know that EmDee always, and I mean ALWAYS has a plan.  In a previous life, I'm sure she was that kid (there was always one in every neighborhood) who convinced you that it was absolutely feasible to build a fort in the woods behind your house with a couple of 2 X 4’s and some duct tape if you would only pilfer that Phillips head screwdriver and a socket wrench out of your dad's tool box.

EmDee suggested that I throw myself my own party.

She immediately started in with, “Roses!  You need a LOT of roses!  White ones!  I have a friend in the business…” And then she says, “White Lights!  Out the back windows!  We could use thumbtacks to hang them!”  She’s on a roll now.  “On sale after Christmas!  You only need 10 or 15 or 20 strands!  And champagne buckets MADE OUT OF ICE!  And artichokes and green grapes for centerpieces!  And white candles!  And green candles!  Lots and lots and lots and LOTS of candles!!!”  She’s practically screaming at this point and I’m sure people were looking at us, but her voice started to fade away as I started daydreaming…

Weeks later, my confirmed guest list numbered more than 80 people.  I’d never cooked for 80 people.  The most I’d ever cooked for was eight people.  After extensive research (20 minutes on the Web), I discovered that 2 bites of 8 dishes per person was the recommended amount of food to prepare.  That didn’t sound like a lot, so I figured that 2 bites of 12 dishes per person would be better.

I settled on 10 dishes that would be served as one or two bite handheld-hors d’oeuvres, one plate of veggies and 4 big platters of cheese from The Truffle Cheese shop.   I cooked and cooked and cooked for weeks and weeks and weeks, storing everything in the freezer so my staff of low-paid teenage servers could just throw everything into the oven right before the party started.

But goodness, it seemed like an awful lot of food.  I’m highly organized and I’m a very good cook.  But apparently, I’m not very good at math.  I never considered that 80 people X 2 bites per person X 10 individually-made hors d’oeuvres equals:

At the party, there was barely any room for EmDee's gorgeous flowers (thank you, friend-in-the-business) and candles and artichoke centerpieces – the tables were overflowing with all this food.  And as quickly as the food came out, empty platters returned to the kitchen.  Good Lord, these people were like locusts.  Two hours into the party, all the food was gone.  Well, except for most of the veggie platter and a few rinds of cheese.  It was a fabulous party.

It’s just as much fun (or maybe more fun) to cook for a much smaller crowd.  And the math is easier.  Especially if you’re making these fancified deviled eggs. 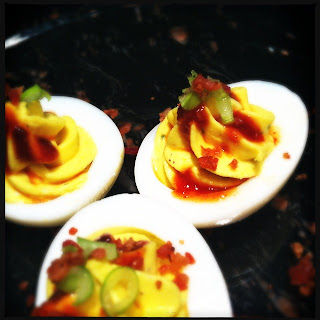 Directions:
Peel eggs and slice in half lengthwise.  Remove yolks to a separate bowl.

Place 12 egg white halves on a platter.  Set aside 4 egg white halves for another purpose.  Or pour hot sauce over the top of the remaining 4 halves and eat while preparing the rest of the dish.  That’s what I do.

Smash the eggs yolks with the back of a fork until most of the lumps are out.  Add the mayo, sour cream and Ranch Dressing mix and combine.  If the mixture is too dry, add a little more sour cream.

Mix the BBQ sauce with the water to thin it out slightly.

Pipe or spoon the yolk mixture into the egg white halves, mounding slightly.

Drizzle a bit of the BBQ sauce over the top, sprinkle a bit of bacon & green onion (if using) and serve. 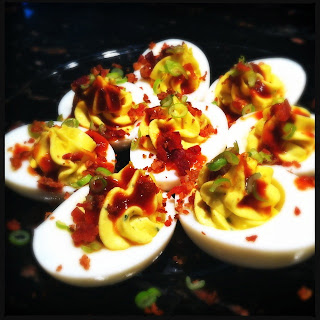 
Foolproof hardboiled eggs:  Carefully place (preferably) room temp uncooked eggs in a large saucepan.  Cover with COLD water & set burner to high.  Bring to a rolling boil, turn off the heat & place a lid on the saucepan.  Set the timer for 10 minutes and fill a large bowl with ice and water.  When the timer goes off, place the eggs into the water bath to cool.  Drain and use immediately or store covered in the fridge.

·      If you don’t have a piping bag with a fancy tip to fill the eggs, just fill a Ziploc sandwich bag with the yolk mixture and snip off a small corner.  Pipe the yolk mixture out by squeezing the bag from the far end.