If You Can't Stand The Heat... 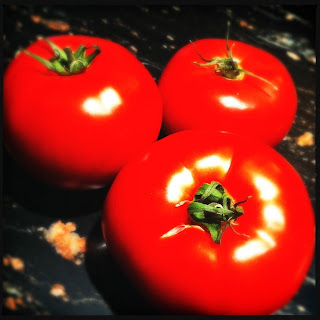 Growing up in Western New York, heat showed about 8 ½ minutes per year, typically appearing on July 16 at 12:47 pm, give or take a minute or two.  Oh, but when that heat showed up, I was miserable.  I’d whine and cry and make a big deal out of walking around our non-air conditioned house with a washcloth draped over my head, fashioned like an undersized terrycloth bridal veil.

And if July 16 fell on a Sunday, you can bet my dad had to carry me out of church like a rag doll after I passed out from the heat during 12 o’clock mass.

I live in Colorado now and what we have out here is “dry heat.”  As in, “I know it’s 90 degrees, but it’s not bad because it’s a DRY heat.” Dry-heat, shmy-heat.  Hot is just HOT.  It was 102 degrees outside yesterday and it’s shaping up to be a repeat today.  We’ve had record-setting high temperatures and frankly, I’m sick of it.  Who wants to cook when it’s like this?  It makes me cranky.

This last Father’s Day, it was 95 degrees.  Even though his three kids couldn't come for dinner (Texas and Kansas are long drives from here and the third had to work), my husband asked me to make him Thanksgiving Dinner for Father’s Day.

#1 – He's not MY father.
#2 – I serve my signature 5-hour-butter-hand-basted turkey once a year at the end of November for one reason:  It’s not 95 frigging degrees outside. 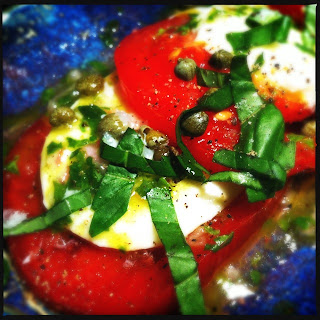 When I first started catering, I proposed menus would “wow” my clients, made EVERYTHING from scratch and served it all with a smile.  That’s because I started my business in September.  It’s not hot in September.  Smiling in the kitchen is easy in September.

“It’s a small family gathering,” the client told me.  “Just immediate family for my sister’s birthday.  Twenty five people.”  Small?  It was mid-May and this was one of my very first catering gigs for someone other than friends and family.  Together, we decided on a barbeque theme because of the outdoor party setting, but stepped it up a notch in terms of menu.  Planked Salmon, roasted corn salad, citrus wild rice, a bunch of fun stuff that wasn’t your run of the mill weinies & burgers.  I also said that I would make homemade sweet potato chips with lime zest – a huge hit at much smaller previous gatherings I'd catered.

The day before the event, record high temperatures were predicted.  It was the end of May and the weatherman said that temperatures would hit the mid-nineties.  We have a swamp cooler in our house, but it hadn’t been opened up for the season yet.  My kitchen was gonna be an  oven with all the cooking I had to do, but I had to make the sweet potato chips because I’d never have enough time to make them the day of the party.   They’re pretty labor intensive.  But it was really danged hot.  Bandana-wearing, sweat-flying kind of hot.  All day, I kept waiting for it to cool down so I could get the oil going so I could do those darn potato chips.

It’s one in the morning.  My husband gets out of bed and stumbles into the kitchen, still half asleep.  “What are you DOING?” he asks, even though it’s clear what I’m doing.  “I’m making @#$%!#& potato chips!” is all I can say.  I’d like to think that I’ve got a zen thing going on while I’m making these chips since it’s a pretty repetitive process, but in reality, all I can think is, “I hate making @#$%!&# potato chips.  I’m never eating another @#$!&# potato chip for the rest of my life.  Potato chips @#$%!&# suck.  Really really suck.”

It’s about 178 degrees in my kitchen and I still have two more hours of potato-chip-making in front of me. In order to maintain the correct oil temperature, I can only cook five or six chips at a time - basically, less than a single handful every three minutes.  Standing over the hot oil is so uncomfortable and sweaty that I was wishing I didn’t have any clothes on.  But the spattering hot oil and probable unsanitary conditions made that an imprudent choice. (Note to all former clients: at no time did I ever prepare any of your meals naked.  But I thought about it.  Especially if your party took place in the summer.)

I finished the damn chips at three in the morning.    The client loved my @#$%&!# sweet potato chips.  It was a great party.  I never made those chips again.

Here’s a recipe for my twist on a Caprese Salad.  No hot oil necessary.  Totally appropriate for a scorching day.  I’d give you the recipe and some pictures for those chips, but it was more than 103 degrees today.  Standing over a hot stove just wasn’t in the cards.  It’s not ladylike to curse so much and I can't pull off that undersized terrycloth bridal veil look as well as I could when I was ten. Directions:
Dressing:  Combine vinegar, salt, sugar, 2 Tablespoons basil and all of the olive oil in a blender or mini food processor.  Pulse a few times.  Remove to a small bowl and add shallots.  Set aside.

Arrange tomato & mozzarella on a platter, alternating red and white.

Drizzle a small amount of the dressing over the top of the tomatoes & cheese.  Sprinkle a few capers over the top (optional) and garnish with the remaining chopped basil.  Finish with ground pepper and kosher salt.

Tips and shortcuts:
·      Use the freshest tomatoes you can find.  This dish thrives on its most basic ingredients.
·      If you can find “fancy” mozzarella, this is the time to use it.  I tested this recipe with store brand fresh mozzarella, market house-made mozzarella and bufala mozzarella (the kind derived from a water buffalo, not the kind of cheese made in the lower west side of Buffalo, NY.  Which I’m sure is delicious).  The bufala (pictured) was oozy and luscious.
·      If regular tomatoes aren’t in season, grape or cherry tomatoes can be used.  In the wintertime, I think they are quite good while regular tomatoes are notsogood.  Cut the tomatoes in half and use boconccini mozzarella (small balls) or mozzarella cut into comparable sizes.  Don’t use the bufala.  Toss the tomatoes & cheese with the vinaigrette and garnish as directed.
·      Use coarse sea salt or flake salt to finish the dish, if available.  It adds texture as well as flavor.

Posted by Kelly Bartus Kal at 8:19 AM