I was in the sixth grade when I burned my first meal.

I grew up in the 1970's in a small town in Western New York, but I might as well have grown up in the 1950's.  Great for growing up (no bike helmets, unlimited firefly-catching, no soccer games) - but not so great for food.  Like most of my friends, 99% of the time our meals consisted of meat and potatoes.  The rest of the time, we had pepperoni pizza.  Cream of Mushroom Soup was an all-purpose sauce.  Pour it over chicken?  Yes!  Pork chops?  Yes!  Ground Beef?  HELL, YES!!!   I came of age in a part of the world where every family had Jello molds... and knew how to use them.

To simplify grocery shopping and to make it easier on my working mom, we ate the same meals every week, rotating with the days:

My best friend, Adina, was coming over for dinner.  Adina was a vegetarian.  In my family, that’s the same thing as saying an alien was coming to visit.  On a WEDNESDAY.  Clearly, chicken was not an option.  It also meant that my mother was FINALLY GOING TO BE ABLE TO COOK SOMETHING ELSE.

I was never aware of her planning the meal.  I was twelve.  I wasn't one of those I-learned-how-to-cook-standing-on-a-chair-next-to-my-Italian/Polish/Whatever-Grandma. My mom would occasionally ask me to brown the ground beef or pour the pizza sauce over the chicken before she got home from work, but most nights I sat at the table at 6 pm and dinner was served. It's all I knew. Looking back, I'm sure my mother was excited to finally make use of those Time-Life “Good Cook” books she collected over the 70’s and 80’s.

My mom settled on Stuffed Shells. She stayed up very late the night before the vegetarian/alien came to visit – cooking the shells, preparing the stuffing, stuffing the shells.  Exotic and heady stuff for a woman who, until then, had never had the opportunity to cook any of the fancy food from her fancy cook books.   It was to be an epic meal.

The next morning, she wrote out my list of chores to complete after I came home from school that day, blessedly abbreviated since I would be entertaining a guest.  The abbreviated list consisted of one thing: put the shells on to cook at 4 pm.  I’m going to cut my mom some slack here, because I’m sure she was living on about 3 hours of sleep after all that cooking, preparing, stuffing and whatnot.  But from what I remember, my dearly beloved, overtired and exhausted mother wrote only:  “Put The Shells On At 4”.   Please remember that there are a number of factors going on here…  1) I’m 12 years old.  2) My best friend is at my house for the first time and I’m pretty sure we were obsessed with the Grease soundtrack at that point.  3) In my life, I had only ever browned ground beef and poured pizza sauce over raw chicken.  4) There’s a good chance that she wrote more instructions than “Put The Shells On At 4.”  But I was a pretty smart kid.  My mom put the red sauce-covered shells in a big pot.  The SAME pot she cooked the Monday night Ragu + ground beef.  That pot always went on the burner.  So would this pot.

Mom comes home, the vegetarian/alien and I are dancing and singing along to “Summer Nights” (Adina and I would sing along to both Danny & Sandy’s parts since we both couldn’t agree on who would be Sandy) and all of a sudden I hear a shriek from the kitchen.  I ran in and there was a particular odor coming from the pot.  Not smoky, exactly.  It was acrid, like a piece of burned plastic on a piece of metal.  With that smell, I could already taste it and it wasn’t good. “Why didn’t you put the pot IN the oven like I asked????”,  my normally calm and composed mother demanded.  “Didn’t you read my note?”  Because I had my best friend over, I believed that normal house rules wouldn’t apply.  My response to my mother was, in a word, inappropriate.

She called in for cheese pizza.  But while the rest of the family and Adina-the-vegetarian/alien ate pizza (on a WEDNESDAY!), my punishment was to eat one of those shells, and not just a bite.  I had to eat an entire one of those damn weird smoky/metallic burned stuffed shells.  I can still recall that taste as if it were yesterday.  For years, I wouldn’t eat a stuffed shell.  I believed that that one incident was an indicator that I could not and would not ever be able to cook.

Yes, it got better, just like everything gets better after your preteen-angst and trauma.  My friend Adina (the vegetarian/alien) wouldn’t approve of my version of stuffed shells, but, man, I still can’t bring myself to make them like my mom (or should I say I) made them that day… 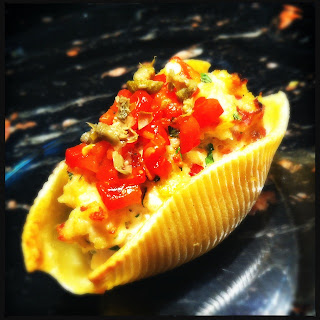 Cook pancetta and onion in 1 tablespoon olive oil in a non-stick skillet over medium low heat until onion is softened and pancetta is slightly crispy, about 10 minutes.  Turn off heat and stir in garlic.  Cool slightly, at least 5 minutes.

Gently stuff each shell with (heavy) 1 tablespoon of the mixture, being sure not to overstuff or rip the shells.

Arrange shells 1 inch apart on the cookie sheet and place INSIDE the oven.  Cook for 20 minutes.

While the shells are cooking, make the peperonata.  Combine the chopped red pepper, vinegar and crushed red pepper.

Let the cooked stuffed shells rest for a few minutes.  Garnish with the peperonata, a pinch of chopped capers and serve.  Eat with your fingers.

Tips and shortcuts:
·      Cook a couple of extra shells.  There’s always one or two that rip before you have a chance to stuff them.
·      Slightly undercook (and I mean by 1 minute or less) your shells.  Liquid will be released during the baking process and will add additional moisture to the pasta.
·      If you don’t have access to pancetta, use bacon, but be sure to drain thoroughly before adding to the stuffing mixture.
·      Resist adding the garlic too early when cooking the pancetta and onion.   The garlic will cook sufficiently once you add it off-heat to the hot pancetta and onion.  If you can smell it, it’s cooked.  Remember it’s going to cook more in the oven.  Overcooked garlic is fine as a fancy garnish, but it’s bitter as an ingredient.
·      You can use a prepared roasted red pepper tapenade or roasted red pepper pesto in place of the peperonata.  Or basil pesto.  Or just a drizzle of good quality jarred pasta sauce.